This bouquet painting was commissioned by a husband in Minnesota for his wife as an anniversary gift. I often get multiple photos and work with each to rearrange and find the best view  for the composition and one that captures the spirit of the bouquet.

I called this one "Wild at Heart" because of the big succulent plant in front that had so much movement. It was a balance to include it since it was an integral part of the bouquet, yet not let it take away from all the other lovely flowers and berries. 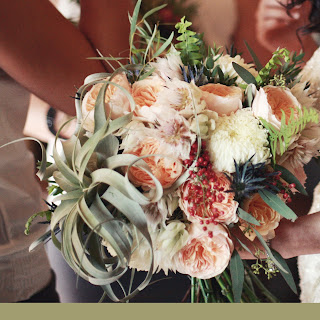 Soft, luscious roses in this beautiful ruby red glass vase were the subject for this painting. I had started it last weekend in a workshop with Dennis Perrin but didn't finish it. Below are the set up and a work in progress shot.  It's tough to go from working from the live set up  under particular lighting conditions to finishing a painting from photo's or just responding to what's there. Once you start changing one thing, then it requires other changes because every shape, color, value in the painting relates to everything else.  With oil paints, since you can make changes pretty easily ( as compared to watercolors which are much more difficult to alter)  it's tempting to want to change things, but you also run the risk of losing the freshness or sacrificing something that was really working for something less.

I did make one pretty significant change which was in the background. I enriched the color a bit and reduced the contrast in value from top to bottom. There still is a gradation from dark to lighter if you see the painting in person it's more evident, but it's not as extreme a change as it was before. I may have lost some of the dramatic lighting that was in the earlier version, but I think the final version looks more colorful with the greenish grey background against the reds and there's less attention on the back flower on the left where there was more contrast before. I also feel the painting has more of a fresh, contemporary feeling and less of an old world classic look and for some reason that just felt right for this one.  Of course, on another day I could have just as easily gone the other way.  It really depends on what I was shooting for. My original intention for the painting was that it feel soft and romantic.

If there's one thing I've learned about art, there are many possible approaches that can work. You just have to choose. 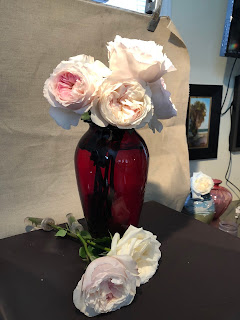 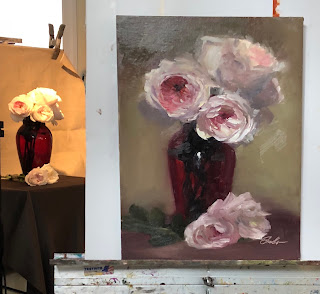 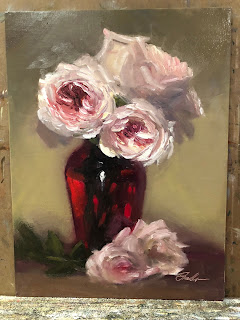 Every once in awhile it's nice to step back from the complexity of a bigger still life set up with lots of elements and just focus in on the exquisite beauty of one simple (or in this case ,not so simple)  flower.
Posted by Pat Fiorello at 4:13 PM 0 comments

Had started  this small painting the other day in preparation for a larger painting of this subject.

This was my floral arrangement of O'Hara roses. 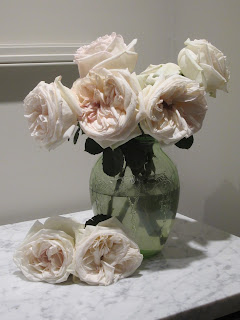 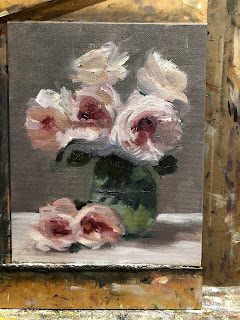