Just completed a much larger, more detailed version of an earlier study based on one of the photo's taken during a workshop I did with Ovanes Berberian in France earlier this year. The flowers were set up outside against a stone wall.

The small 6 x 8 study and the original photo reference are posted below.
Every piece of art reflects the artist's choices- what to include, delete, emphasize.

In the small study I was focused on the light and shadow of the flowers and pot and totally changed the background to keep it simple. In the larger painting, I still eliminated the plants from the background, but wanted to at least suggest the stone wall and focus more on the distinctive shapes and form of the flowers.

Funny,  after nearly 3 months I did not remember the name I had put on the small study when I posted it back in September. When I  just went back to check it, I see that it is called Fresh Morning. The new one is called Fresh. Probably no coincidence. That's how I feel about monochromatic groupings of white flowers against green leaves- it has a feeling of freshness to me. 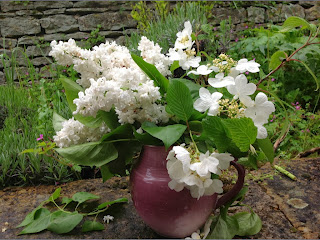