Are you opening or closing doors? 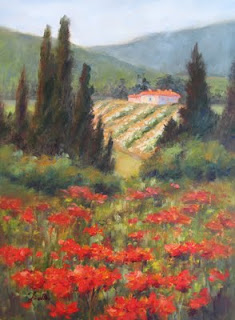 Beyond the Poppies
Oil Painting by Pat Fiorello
Sold

In the book, Rich Dad, Poor Dad by Robert Hirakowa,  the author shares a very powerful lesson. When he was a kid,  and wanted something, like a new bike, his biological dad (a.k.a. the Poor dad) would say  "We can't afford that". And that was the end of it.

But he was lucky to have the guidance of his best friend's dad ( a.k.a. the Rich dad) , who instead of saying, "We can't afford that," would turn the table and ask "How can we afford that?"

Can you see the difference?  The first approach is a conclusion and closed a door.  It occurs like a fact- we cannot afford that.  There is no possibility or even opening to look at creating anything. But by asking instead of concluding, it opens the door to explore. If I really wanted that what are some ways to get there. Concluding closes the door and asking opens up creative solutions.

Where does this show up as it relates to your art (or other areas of life that are important to you)? Are there places where you tell yourself  " I can't ..., I'll never"?  What would happen if you changed it around to "How could I"?
Posted by Pat Fiorello at 10:00 PM