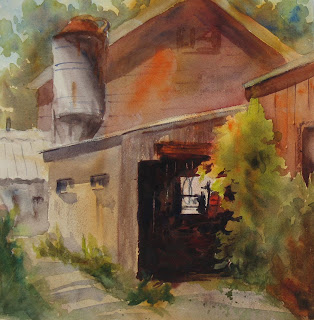 The painting above is one  of my watercolors that was published in "Splash 11 -The Best of Watercolor"- a book  published by North Light Books, which comes out every couple of years featuring beautiful examples of watercolors from today's artists.  There are thousands of entries from artists all over the country and about 100 are chosen to be included.
The reason I share this is because this is one of those examples of a time when I said "go for it, just enter" and  I didn't listen to the little voice in my head ( you  probably know the voice that I'm talking  about - the one that second guesses our decisions or has a constant opinion). The voice that usually says- "why bother entering,  you'll never get in".
An artist friend of mine said to me once that she wasn't going to enter a juried show( she had that same little voice in her head) , then thought, "hey this show has a judge- let the judge do his job, it's not my job to pre-judge this." She entered and even won a prize. So sometimes in life, we just need to go for it and get out of our own way. Where have you been stopping yourself  from trying something new or stretching out in a new way? Give up the doubts and give it a try. You just might get  a nice surprise.
This quote from Wayne Gretzky, probably one of the all time hockey greats, says it all...
“You miss 100% of the shots you never take”- Wayne Gretzky
Posted by Pat Fiorello at 7:13 AM